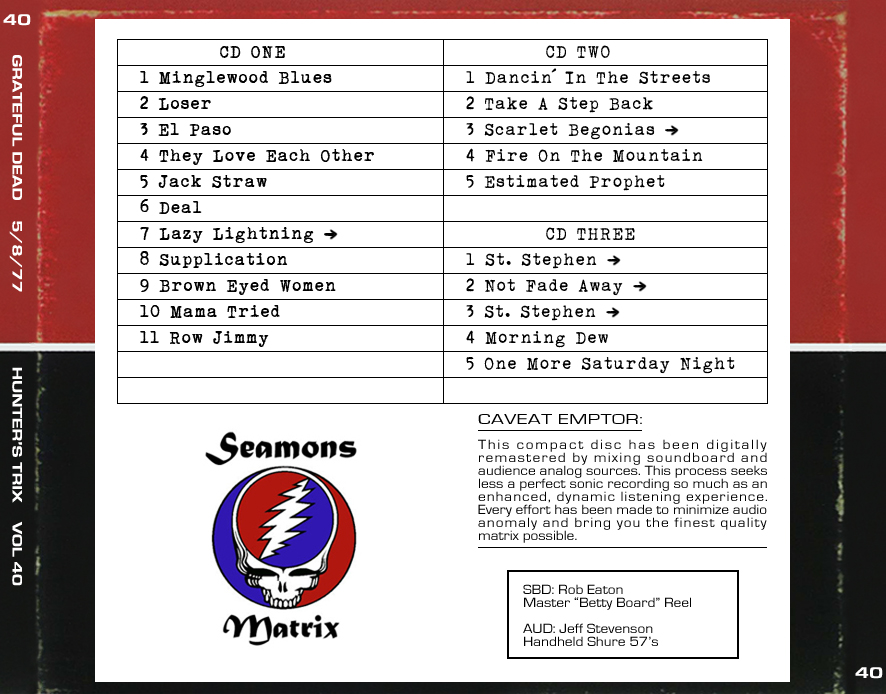 1) Warning: this might steal your face - the sound is impeccable, thanks to truly excellent sources for a matrix.

A Few Pauses But Not Many, Tape Filp After Supplication,

Flip During NFA Crossfaded And Is Barely Noticeable,

Minimal Crowd Chatter, But With Handheld Mic's, Up Front,

There Are A Few Spots Where In An Ideal World, A Few People

Would Have Been Standing Somewhere Else.

If Anyone Wants To Matrix This Feel Free, I'd Love To Hear It!

Thank you to Rob Eaton for the SBD transfer,

and to Jeff Stevenson for recording this all-time great show.

I removed a "click" sound I mistakenly added to the AUD-only portion of Supplication at 0:06. I fixed this by patching in the unscathed AUD there, rather than using a de-clicker filter. This "click" had always driven me nuts and warranted a fixing.

Thank you for your continued patience and support.

Thanks Hunter, from one Songcatcher to another.

Here is a story of playing this 40-year-old recording at Red Rocks on the anniversary: https://other2funstuff.blogspot.com/2016/11/grateful-dead-shows-streaming-to-parks.html
Reviewer: elegantcheese - favoritefavoritefavoritefavoritefavorite - March 2, 2018
Subject: Barton Hall review
I got an account on here just for this review.

There are a lot of shows in this database. There is an intimacy between the audience and the band that exists in many of these shows but here it seems truly transcendent.

The crowd echoing off the walls of Barton Hall in response to the music like they are all on the same, clean dose provided by Timothy Leary.

And then I noticed this:

Cornell '77
The Music, the Myth, and the Magnificence of the Grateful Dead's Concert at Barton Hall
Peter Conners
Cornell University Press

And I can't buy that article for the $22 they want for it but I believe it directly ties the magnificence of this show to LSD.

Additionally, every person has their own opinion, as well as their own subjective filter by and through which they interpret a show. Song choice/set list, era, and many other factors influence individual opinion.

That being said I keep coming back to this show over and over. Having listened to hundreds of shows, making my own list of top shows, revisiting those, etc. no show I have ever heard EXCEEDS this show. Personally I am a '73 fan, but there are valid arguments to be made for each era's superiority.

Here is why this show is one of, if not the best. All arguments about Jerry being the leader aside, he was definitely the heart and soul of the band, especially post Pig. Listen to the energy from the beginning to the end of this show. Listen specifically to the energy Jerry had throughout the entire show. Listen to what he is doing on the guitar in El Paso, Jack Straw, Deal, etc. and you will realize that there is an extra vibrancy even in the old standbys at the beginning of the show.

That doesn't even begin to consider the songs that everyone raves about, Row Jimmy, Dancin, Scarlet-Fire, St Stephen-NFA-St Stephen, Morning Dew...mere words cannot do justice. Words like amazing and unbelievable and incomparable don't capture the immensity of awe they inspire. The whole is far greater than the sum of the parts, transcending even time and space...

As a musician and a person who has observed many, many musicians over many, many years I can tell you that musicians are like athletes. Most especially, elite musicians are like elite athletes, there are days where everything you do is magical, i.e. "in the zone". For musicians, this is where energy and creativity combine with inspiration to flow as if divinely sourced.

Thank You Archives, Thank You Hunter

Klearjet
Reviewer: hampton87 - favoritefavoritefavoritefavoritefavorite - February 29, 2012
Subject: wow
today is feb 29 no dead shows on leap year. so i went to the most downloaded section and decided to listen to this show again. went straight to s>f. this version is the perfect match of sb/aud. nice job. you can hear it so clearly with such great intimate crowd noise. phil bass is so clear as is the keyboards, guitars. the music is so good. if i had a time machince and could go back in time to a few times i might just go to Cornell university in 1977. I went and grabbed my best headphones and thank goodness I can have a taste of what a time machine might produce. as if i were plugged into the soundboard of 5-8-77. wow. 4.99998 stars
Reviewer: BrettC710 - favoritefavoritefavoritefavoritefavorite - December 20, 2011
Subject: How to Download?
Alright, this is my favorite show of all time -- which I only know by streaming it constantly. How do I go about downloading it? When I click on each of the download links, it gives me a binary file that opens in TextEdit and is garbled code. I have a Mac, if that makes a difference.

Slide guitar sounds like a pedal steel!
Most incredible Jam!!!

I've taken this show all around the world with me for nearly 20 years since somebody first turned me on to it in Ann Arbor Mich. Scarlet>Fire is only my second favorite. The jam on Not Fade Away is first. Jerry at top top form, all the way in tune with his aluminum Travis Bean. Enjoy.
Reviewer: Dylan M - - January 14, 2011
Subject: Keep it going with 77'
Hunter,

Your matrix of swing 2/27 was perfect, I am currently downloading your source for this. Keep it coming. Happy new year and thanks for making these shows sound their fullest.
Reviewer: hseamons - - January 11, 2011
Subject: New source info
I thought this would adjust 97274, not create a new shnID, as what happened when I fixed Crazy Fingers in 10-10-82 before the 24 bit version was made. Oh well, just another source to add to the pile - and that's, OKAY.